Don’t get distracted by Sorrell’s ‘No Creative’ trolling

Getting dragged into media-fuelled playground arguments about whose discipline is better is getting agencies nowhere. We just need to focus on solving clients’ problems. 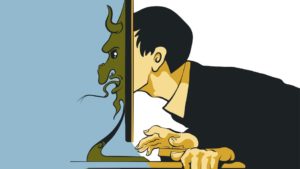 Did you see Jeff Goodby’s weird AdWeek article about S4 Capital? The main thrust feels like ‘proper ads good, banners bad’. Which for anyone who’s been chased round the web by some pants they’ve already bought, is not unreasonable.

But aside that being a pretty skewed characterisation of S4, he then goes on to acknowledge that Sir Martin Sorrell’s new company does indeed include creative businesses, not least MediaMonks.

I also take issue with Jeff’s idea that creatives are the ones who earn agencies their money. That’s surely as dated as it is snobbish.

Of course business is evolving – as is our industry, however you define it. But all these phoney wars between disciplines are getting really old. We might as well argue about whose dad would win in a fight.

Honestly, as if everyone doesn’t recognise that all this Mad Men vs. Math Men crap is counterproductive.

But that’s not to say we don’t need to question where we’re headed.

As Ogilvy’s Rory Sutherland tweeted the other day “working in the advertising industry today, one increasingly feels like a man who’s turned up at a poetry festival only to discover that every talk is about bookbinding”.

At least he’s diving into the issues and reminding the blinkered – and the forgetful – that placement (inc. media and data, obvs) sits alongside creative ideas as the oft-proven route to effectiveness.

Frankly, with ad agencies facing new competitive pressures, it’s bizarre that Rory’s the lone voice going beyond their stock defence of “Because Creative”.

Obviously I’m not saying that traditional creativity is unimportant. And no, ‘traditional’ isn’t pejorative. But any use of ‘creative’ where you almost smell the implied capital ‘C’ just reeks of fear at the loss of the good ol’ days. Which is a bit like Brexit really, isn’t it?

It’s not that ad agencies are dead. Far from it. They’re just no longer the only show in town – and that’s good for everyone.

I should also add that this isn’t a defence of S4 Capital either, btw. As Mediatel’s Dominic Mills’ great piece on their prospectus highlighted, they’ve fallen into the modern base-covering trap of using all the words.

Ultimately, as Jeff suggests, SMS’s ’no creative advertising’ line is just a headline. It’s click-baity ad agency trolling. And yet here’s him, me and everyone else, happily biting away. Bastard!

Far more importantly, time and time again, senior marketers tell me that they just want to know what problem your agency actually solves.

In a complex world full of tricky problems, giving clients a decent definition of the value you bring – rather than leading with the way you do it – is far more useful and differentiating.

And if that doesn’t sound like rocket science, that’s because it isn’t. What’s odd is why so few agencies create a narrative beyond an empty slogan that just re-articulates their discipline.

When your ‘what’ cuts through, you’ll find your ‘how’ becomes far more welcome.