Marketers must empower their agencies to fail 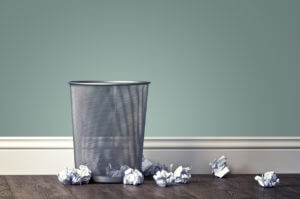 My cell biology degree course taught me three things: a lifetime’s worth of Simpsons quotes (do NOT get me started), ‘herbal’ cigarettes are not a career choice and advances in science come from disproved hypotheses.

And although I’m not denying the transformative power of ideas, perhaps that grounding in learning-through-failure is why eulogising ‘Creativity’ as the root of all progress leaves me cold.

In contrast, I’ve always warmed to the notion of ‘failing fast’ – or rather, as Zone CEO Jon Davie said at a recent BIMA event, “learn fast”.

Unfortunately, if creativity is always the answer, that doesn’t leave much space for failure.

A wrong idea isn’t always a bad one

With their incurable optimism and a prime directive to be creative, embracing failure just isn’t in most agencies’ DNA.

But agencies weren’t always so keen, preferring you didn’t know which half of your budget they were wasting.

It’s the same when agencies lose pitches. They only see two possible explanations: either theirs was a ‘bad’ idea or you must be some kind of philistine, lacking the courage to see the light. No prizes for guessing which they prefer.

Clearly it’s not so black and white. A wrong idea isn’t necessarily a bad one. That’s not the world we live in.

As Jonathan Bacon’s piece for Marketing Week on creativity in an automated world highlighted, the likes of AI, programmatic and automation are driving profound change.

And yes, as Unilever’s Dan Izbicki said at an IPA event last year, most advertising is terrible. But that’s hardly surprising; there’s a shit-tonne more space to fill, often with less money – no wonder nimbler specialists are challenging mainstream agencies.

The point is that context is king.

It’s not enough for advertisers to know that I’m a married man of moderate means, who clicked onto Agent Provocateur for a gift in early February. You also need to stop those sexy undies from stalking me round the web until June.

I bought them, damn you – LET ME LIVE MY LIFE.

Anyway, I digress. Suffice to say, with customer experience and accountability now top priorities, assessing the effectiveness of ideas has got a lot more nuanced.

Ironically, in a digital world, creative quality is far from binary.

So how do we navigate this newly transparent landscape? Let’s try another Silicon Valley-ism – ‘what would you do if you weren’t afraid?’

Obviously cowering under the sword of Damocles doesn’t help anyone embrace failure. Like the England Test team in the 90s, knowing you’ll be out on your arse after one bad match won’t help players perform.

So for agencies, a hiccup in effectiveness need not feel like a one-way ticket to reviews-ville – or forever consign a creative idea to the ‘shit’ pile.

More likely, a cheeky tweak informed by ‘failure’ could be the key to success (because, science).

Don’t buy into the fight

Unfortunately, the iteration game isn’t easy. Although ‘fail-fast’ was long-preceded by its less gobby elder sibling ‘test-and-learn’, it’s also got way harder – not least because we’re being distracted with unhelpfully polarised agendas.

On the side of magic, we have agencies; worshipping at the altar of ideas, their knees seized from a lifetime of sanctuary.

And arguing for logic, ex-HSBC marketer Philip Mehl says “marketing used to be a creative challenge but now it’s a data challenge”, echoing the case made by the ad tech industry.

So let’s reject these conflicts. Give those ‘v’s the V’s. And let’s never say mad or math ‘men’ ever again.

Let’s all step into the light

Clients, lead your agencies from the refuge of their church into the reality of the trenches.

See beyond their chipper veneer and free them from the fear of failure. Of course results are everything, but reassure them that short-termism doesn’t govern all. Tell them they’re in team for the next match, no matter what.

Agencies have a big opportunity too.

Promise your clients failure and improvement alongside creative brilliance. Have the confidence to reject brands that don’t want that kind of relationship. Make your commitment to effectiveness a principle, not just a slogan on your corporate coffee cups.